Welcome to our food page!

We didn't know what people ate around the world - now we know! 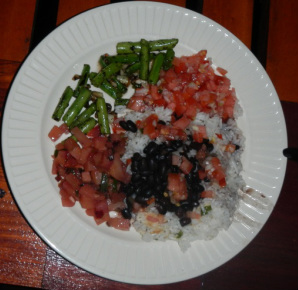 Lots of rice and beans (surprise!).  Surprisingly though, Costa Rican's don't seem to eat much salad even though the growing season here is FOREVER and herbs and veggies seem to grow overnight.

While we were volunteering on the farms we ate salad that we picked from the gardens (soo cool!) but the host families always avoided them.   Instead they ate mostly just the carbs - rice, beans, plantains, bread, pasta - sometimes all of those in the SAME MEAL, and FOR BREAKFAST!

It seems like most meals are the same, rice, beans, maybe some eggs or cheese thing, maybe a slice of bread and butter toasted really hard, and maybe a piece of fruit and some plantains.  Lunch is the biggest of the 3 daily meals but not when we eat   :) 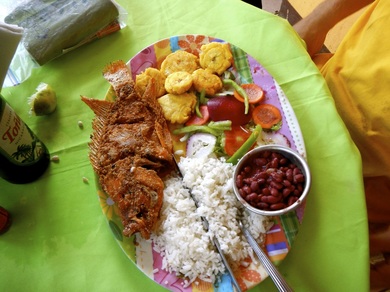 Pretty similar to Costa Rica but more fish involved.  However, could be just because we are on the beach here and when we were in Costa Rica we were living on farms eating all vegetarian everything. 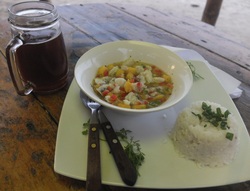 Ceviche is the national dish here in Ecuador.  It is essentially chopped up fish, usually sea bass, cured in lemon juice and onions etc.  In Panama the Ceviche was raw fish then cured, but in Ecuador I think the cook it first.

Andrew has ordered Ceviche a couple of times now.  In Panama it was really good, marinated in lemon juice and coconut milk.  It almost tasted like Thai food, delicious.  But in Ecuador the one we tried was very very salty and really sour, not so good.  It probably depends on where you order it.

Otherwise, food in Ecuador is similar to food in Central America, only fewer beans.  Ecuadorians seem to love meat.  It is not an easy place to be a vegetarian if you plan to eat out a lot.  There is a lot of rice in the diet here, as well as potatoes and yuca.  Lentils are more common than beans, and potato soup is often on the menu, but often they throw bacon or some meat in it.

Everything comes with delicious hot sauces.  One of them is light pink coloured and has lots of onion and garlic in it, that is my favourite.  As far as how spicy they are, they really aren't.